Get Panoramic Glances of Himachal in a Vistadome Train 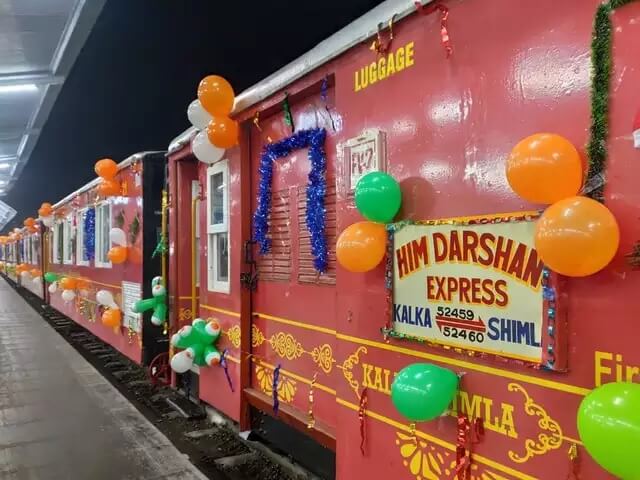 in Hill Stations India, Things to do India, Tour and Travels India

A Shimla tour happens to be the most captivating and beautiful holiday for people from all over the world as the beautiful region is bestowed with nature’s unparalleled splendour. If you are someone who loves to visit Shimla, you will be glad to know that now you will get a chance to savour its panoramic beauty while travelling in a train. Yes! Him Darshan- the first Vistadome train on the Kalka-Shimla route has just begun its run and has quickly become the talk of the town. Want to know all about this fascinating train? Read along!

When Him Darshan was announced, people were looking forward to the much talked-about train because of its uniqueness. Clearly, when the train started its first journey on the merry occasion of Christmas of 2019, it was welcomed with a massively positive response. The maiden journey constituted of 90 lucky passengers who travelled from Kalka to Shimla and were deeply thrilled by the experience. This one of its kind train comprises of 6 first class Vistadome AC coaches. Vistadome trains have glass ceilings which make getting panoramic external glances an added feature. Apart from the 6 coaches, it also has one first class chair car and luggage room to cater to its various passengers. This first leg of the train is expected to last till December 2020.

Special features of Him Darshan

Apart from having glass ceilings, which is the most salient feature of Him Darshan, the train also has some other striking attributes that add to its appeal among the passengers. AC coaches with wooden décor and LED lights give a very stunning look to the interior. The train has modular switches along with reversible seats so one can adjust it according to the direction in which the train is moving, making the journey more comfortable and entertaining at the same time. In case of too much sunlight and brightness, you can also use the honeycomb blinds to avoid the excessive light. Each coach has a capacity of only 15 passengers so that the experience is not compromised due to crowd and continues to be pleasant.

Train schedule from Kalka to Shimla

Shimla is one of the most famous places to visit in Himachal Pradesh which is why this luxury train is scheduled to run from Kalka to Shimla and vice-versa all seven days a week. The journey is approximately 6 hours long with only one stop on its way. The train commences its journey from Shimla at 7:00 AM and reaches its first stop, Barog, at 9:00 AM. After a halt of about 10 minutes, it continues on its route and reaches Shimla at 12:55 PM.

On its return journey, the train starts from Shimla Railway Station at 3:50 PM and after stopping at Barog at 7:00 PM, it reaches its destination stop, Kalka, at 09:15 PM. The speed of the train varies between 14 and 20 kilometres per hour which is ideal for the passengers to bask in the external beauty that they view through the glass dome.

Fare for this thrilling train journey

Despite the unparalleled experience that one is sure to have while travelling in the Him Darshan train, the ticket is priced at a humble 630 rupees so that travellers can enjoy without having to pay a preposterous sum of money. In order to book tickets for the Vistadome coaches, you can either buy tickets manually or book online. However, tickets for the first class chair-car coach can only be procured manually at the ticket counters of Shimla and Kalka Railway Stations.

What to expect from Him Darshan Express

One of the most popular things to do in Shimla is to witness the gorgeous valleys, beautiful green meadows, and snow clad mountains and be moved by the natural bounty of this stunning region. With the Him Darshan train, you can do all of that while sitting in the comfort of a luxury train. The glass dome provides the visitors with the opportunity to view the scenic surrounding while travelling and the experience is nothing but surreal. If you plan to go on a Shimla tour, book your Kalka to Shimla journey in the Him Darshan to be mesmerized like never before.

All we know is that this luxury train is a commendable addition to the Indian railway and globetrotters will definitely have a fun time travelling by this train.

Exciting Places to Visit in the 12 long Weekends of 2020

An Eye-Opening Visit To The Most Romantic Places In India