Jaisalmer: Places to Visit, Things to do & Attractions

Jaisalmer gives you a completely different experience with desert adventure activities, shopping, architecture masterpieces and Desert National Park.  Also, the fact that the Jaisalmer Fort is inhabited by people living there for generations makes it enthralling one.

A trip to Jaisalmer will give you an experience of cultural heritage in Rajasthan. If you are planning to book Jaisalmer tour packages, get in touch with Indiator.

Jaisalmer was founded by Raja Rawal Jaisal, a Bhatti Rajput ruler in 1156 AD. Trikut Hill was chosen as the site for his fort, present Jaisalmer Fort.

Jaisalmer was never conquered by foreign rulers because of its location. During the 13th century, the Turk-Afghan ruler of Delhi, Ala-ud-din Khilji attacked the city which lasted for 9 years and resulted in Jauhar committed by Rajput womenfolk.

It is believed that Duda, the son of Raja Jaisimha, fought in the battle lost and died fighting. The descendants of Duda ruled the city after that because of cordial relations with the Mughals.

In the modern era, there was an agreement signed with the British establishment and since then it has been a major tourist destination.

The best time to visit Jaisalmer is from October to February. Jaisalmer has a pleasant weather all around the year.

Summers are dry and hot, lasts from April to June. Winter season begins in November and ends in February. You will find winters cold and pleasant.

Colorful Rajasthani culture comes alive in the cuisines served in Jaisalmer. The traditional Rajasthani dishes are popular amongst tourists.

Some of the famous food items include Murgh-e-subz, a chicken dish,  Tikkas, Kababs, Ker Sangri (made out of beans and capers), Banon Aloo (made of potato with mint stuffings), Daal Baati Choorma  (made of lentils, bread and sweet dish) and Kadi Pakora (made of flour dumplings and yogurt).

The lifestyle of people of Jaisalmer has been dynamic and it is reflected in the religious activities and other festivals that are celebrated in Jaisalmer.

The major source of income for Jaisalmer people is the tourism industry. People here are quite hospitable and cheerful in nature.

Jaisalmer has a rich cultural heritage and traditions and there’s a lot to explore here. The folk dance and music shows the past traditions, customs, and ancient music.

There is an extraordinary desert life in the villages situated far from the city. People here dress in bright colors along with jewelry and Rajasthani is the language spoken in Jaisalmer.

Things to do in Jaisalmer

Jaisalmer is popular for its Desert Safari, which is conducted in early morning/evening. You can sit on a camelback and enjoy the surroundings of the desert during Desert Safari. After the Desert Safari, you can gorge on dinner and enjoy dance performance.

A water reservoir built in 1400 AD by Raja Rawal Jaisal, is now a beautiful tourist spot in Jaisalmer. You can the serene environment and beauty around the lake, you can go for boating or indulge in bird watching.

It is one of the largest National Parks in India and it is located near Jaisalmer. It offers a desert ecosystem, rocks, thorny bushes, cactus and other desert plants and you can explore the wildlife at the Desert National Park.

Situated near Jaisalmer, Sam Sand Dunes is a great desert dune site with 30-60 m tall sand dunes. You can enjoy the sunrise and sunset while sitting on safari. There is also an evening music program held at the Desert camps at Sam Sand Dunes, which can enjoy with a bonfire.

Held every year in February, Desert Festival is organized to give an idea about the Rajasthani culture to the tourists. The events include camel races, Mr. Desert Contest, Turban tying competition and much more.

Jaisalmer Fort is made up of sandstones and is located amidst sands of the Thar Desert. It is 250 feet tall and has 99 bastions, 92 out of which were built between 1633 and 1674.

You will see that city’s one-fourth population still resides within the fort and it is a UNESCO World Heritage Site. Popularly known as “Sonar Qila”, Jaisalmer Fort offers a view of Jaisalmer City, located on the Trikut Hill.

The Jaisalmer Fort was built by the Bhati Rajput ruler named Rawal Jaisal in 1156 AD. Visit this spectacular fort and experience the fusion of Islamic and Rajputana style of architecture.

Located in the Jaisalmer Fort, these Jain Temples have intricate carvings showcasing pictures of sages, hermits, and animals.

It was built in 12th and 15th centuries and you will find carvings of human and animal figures in Dilwara style. The temple is dedicated to Rikhabdevji and Shambhavdevji (Jain Hermits).

An abandoned village located in Jaisalmer district, named as Kuldhara village is an attractive tourist spot. It’s an interesting attraction site with the ruins of village spread across the desert. Visit this place for its rich history and great architectural style.

It is one famous tourist destination established in 1984 and it displays the traditions and cultural heritage of the Thar Desert. There is a collection of paintings, inscriptions, coins, statues of stone, embroidered dresses and handicraft items.

A beautiful piece of architecture, Nathmal Ki Haveli is famous for its carvings and the two elephants at the entrance gate made of limestone.

You will find paintings and carvings done using 1.5 kg gold leaf and a perfect blend of the Islamic and Rajput style of architecture.

Salim Singh Ki Haveli has peculiar architecture and the room forms a peacock shape. It is located near the Jaisalmer fort and consists of 38 balconies with great designs.

The Haveli is 300 years old and the gateway is covered with stone carved elephants. It is noted that the Haveli is constructed over the ruins of Haveli.

Patwon Ki Haveli is now a museum, showcases various furniture, carvings, and artwork. It is a major tourist attraction and is a group of 5 Havelis.

An elegant heritage hotel, Mandir Palace is a 2nd-century-old architecture. It is beautifully decorated and displays stone carvings, balconies, and canopies. The Badal Vilas is a major tourist attraction here. 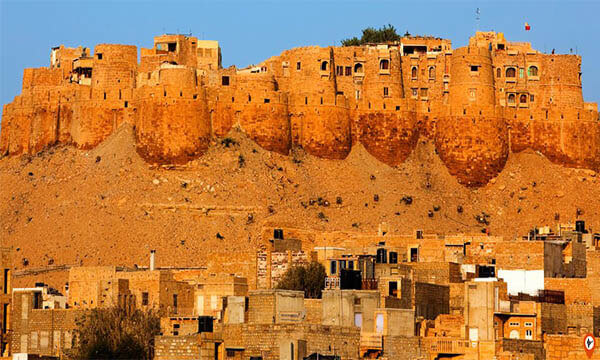 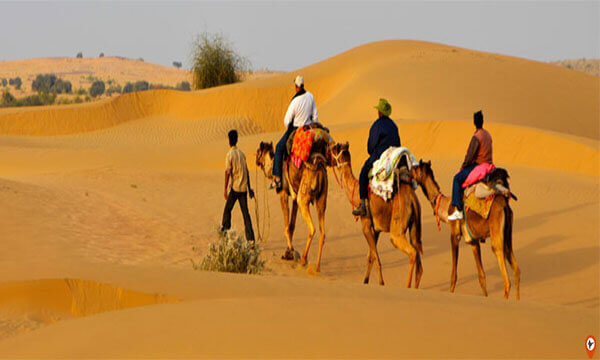 Rajasthan: 11 Best Places to Explore in the Land of Beautiful Sunsets