Aurangabad: Places To Visit, Things to do & Attractions

Aurangabad - The City of Gates

Aurangabad is home to the famous heritage sites Ajanta and Ellora caves and has a lot of stories to tell about the rich history of Maharashtra. Also known as the City of Gates, Aurangabad is a perfect tourist destination in Maharastra. Other major attractions include Bibi Ka Maqbara, one of the principal monuments that have a strong resemblance to Taj Mahal.

The city is named after Mughal Emperor Aurangzeb and it was founded in 1610 by Malik Ambar, the prime minister of the Nizam Shahi rulers in Ahmednagar. What attracts the tourists here is the ancient Ajanta and Ellora caves (Buddhist cave monuments from 2nd century).

The rich culture, heritage and welcoming nature of people of Aurangabad have been contributing to the growing tourism sector here.

Named after the Mughal Emperor, Aurangzeb was discovered in 1610. It is an evident fact that there was a strong influence of Buddhism on the Ajanta and Ellora caves, situated in Aurangabad.

It is believed that a prime minister of Ahmednagar, Malik Ambar established a town called Khirki. Later the town was renamed as Fatehpur in 1626 by his son Fateh Khan.

After the takeover by Aurangzeb, the name was changed to Aurangabad in 1653. In 1707, it was taken over by the Nizam of Hyderabad and later it was merged with Maharashtra in 1956.

Winters in Aurangabad are ideal to visit and it lasts from November to February. The temperature is pleasant during winters and history buffs can enjoy wandering around the monuments during the winters.

Summers in Aurangabad lasts from March to June and is totally dry and sunny. The monsoon season lasts from July to September and there is less rain in the area.

Aurangabad’s culture is influenced by Hyderabad and you will get to see the Muslim culture of Hyderabad. Marathi and Urdu are the languages spoken here. The cultural similarity with the city of Hyderabad makes Aurangabad a city that must be visited once.

Here you will find the presence of Mughlai and Hyderabadi flavor in the local dishes of Aurangabad. The food is also unique in its own way as it is a blend of Marathi spices in a Hyderabadi cuisine.

The famous dish here is Naan Qaila, consists of Naan (bread cooked in tandoor) and Qaila which is a mixture of spices and mutton. Also popular is Tehri, made by adding meat to rice with spices.

Aurangabad is a historical city and a major tourist destination that sees a lot of turnout of tourists every year. The city is peaceful and people are quite hostile in nature.

Aurangabad is a growing city and gives you a different experience of rich Hyderabadi culture and cuisine mixed with Marathi culture.

Things to do in Aurangabad:

Salim Ali Lake is a beautiful lake offering great views and a number of birds to watch. The lake is named after ornithologist, Salim Ali and it serves as a good place for watching migratory birds. You can also enjoy boating during monsoon and winter months.

Visit this beautiful and peaceful place called Dargah of Pir Ismail, built in the memory of Pir Ismail (tutor of Mughal ruler, Aurangzeb). The Dargah consists of Parapet, façade, terrace and a dome.

It is a must visit place located near Killa Arrak and is constructed beautifully. It was built in 1612 AD and is a famous Muslim community, a religious shrine in Aurangabad.

This garden is located at a distance of 24 km from Aurangabad and has fountains, pillars, and domes. Visit the Bani Begum Garden for a peaceful and a calm day.

A water mill built in 1734 by Hazrat Baba Shah Musafir, was used to grind grain for the pilgrims. It is a popular tourist spot and you can enjoy here with your family. The structure of Panchakki is designed carefully and the calm water of the reservoir attracts a lot of pilgrims.

Culturally and historically rich city, Aurangabad has many sights that attract a lot of tourists from the world. The culture and cuisine of Aurangabad are unique and it should be experienced.

These 29 rock-cut monuments, built in the 2nd century and are one of the oldest UNESCO World Heritage Site in India. These are beautiful caves displaying the Indian architectural style and ancient history. You will find Buddhist carvings on ceilings and walls along with stupas in the Ajanta caves. The entrance of the Ajanta caves welcomes you with a tall Buddha statue and the doorway is decorated with paintings and sculptures.

Ellora caves are rock-cut monastery temple cave featuring Buddhist, Hindu, and Jain monuments. There are 34 cave temples of the period between 6th and 11th centuries. The most beautiful is Kailasa Temple and it depicts an amazing architecture and style. It is believed that the caves were built by Jain, Hindu and Buddhism monks.

Built by Aurangzeb’s son, Prince Azam Shah in the memory of his mother Rabia Durrani, Bibi ka Maqbara has stood since 1678 and has a similar architecture as Taj Mahal. It has beautiful surroundings and is worth exploring.

The Daulatbad Fort is located amidst greenery and was built in the 12th century. It gives a full view of the city as it is situated on a hill. To reach the Daulatbad Fort, you need to climb some 700 steps and once you reach the fort, the view will be mesmerizing.

Aurangabad caves include 12 rock-cut Buddhist shrines that were found out in 6th and 7th century. The caves are present amidst greenery and are protected by the Archaeological Survey of India. The major attraction in the caves are the sculptures, which are artificially rock-cut.

Grishneshwar Temple is a beautiful piece of art located near Ajanta caves, Aurangabad. It is one of the 12 Jyotirlinga shrines mentioned in Shiva Purana. It is also considered as an important pilgrimage site in the Shaivism tradition of Hinduism and is worshipped as twelfth Jyotirlinga.

Located 13 km away from the main city of Aurangabad, Khulabad, a small town is a historically important place. It was home to Sufi saints during the 14th century and many Dargahs are located here. It is also referred as the valley of the saints and you can find the ruins monuments from the Mughal era. 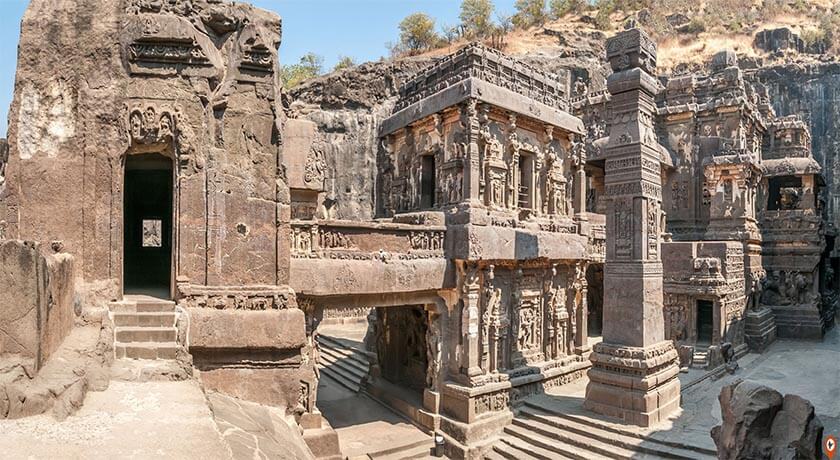 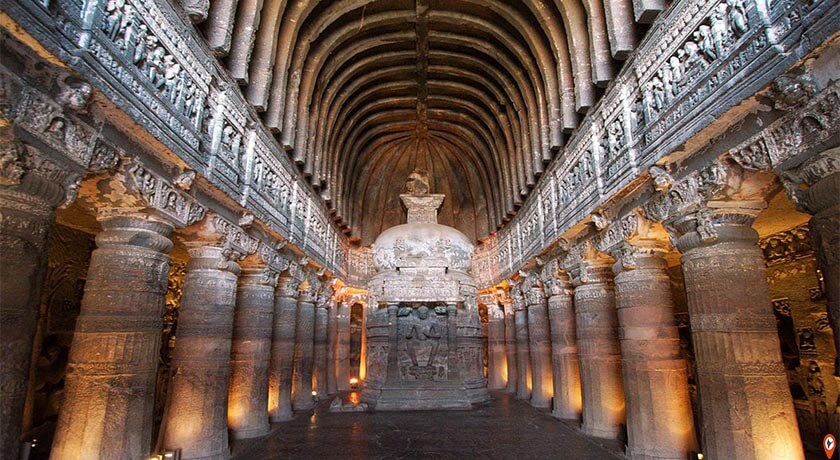 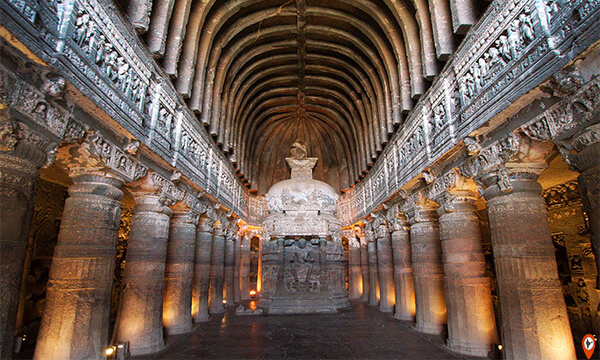 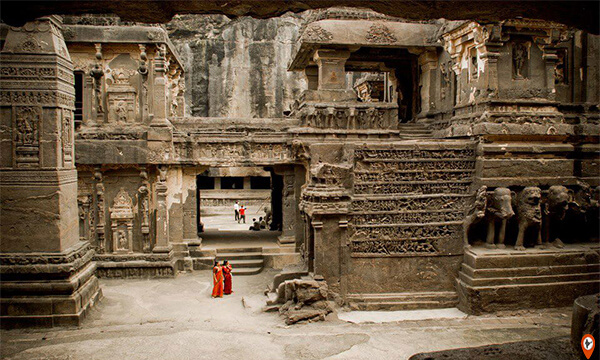 Top 10 World Heritage Sites of India as declared by UNESCO