Darjeeling: Places To Visit, Things to do & Attractions

Darjeeling - The Queen of Hills

Darjeeling attracts tourists from all over the world and is fondly referred as the “Queen of Hills”. Darjeeling is a hill station located in lesser Himalayas and has sprawling tea plantations that make it an attractive place.

The toy train which was established in 1881, is a major tourist attraction. You will get to see the panoramic views of the world’s third highest mountain, Kangchenjunga.

There are monasteries, tea estates, local markets that can be explored on foot. There is a huge British influence on Darjeeling and there is a lot to see and learn about the historical past of Darjeeling. You can enjoy trekking, mountain biking around hilltops and explore the hills.

If you are planning to explore Darjeeling, visit Indiator.com for Darjeeling tour packages

Darjeeling was part of Sikkim and Nepal before its acquisition by the East India Co. in 1835. After independence, it merged with West Bengal in India. Population in Darjeeling mainly consists of Nepalis who migrated during here British rule and Bengalis who were refugees.

The best time to visit Darjeeling is March to May and October to March. Summer starts during May – June, monsoon starts from June and lasts till September.

Winters in Darjeeling are quite cold and starts in December – February. Though the weather in Darjeeling is not much predictable as clouds or fog can come suddenly.

There is a great variety of cuisines and local foods in Darjeeling due to the presence of rich diversity. The local cuisines vary from Nepali to Tibetan and Bengali dishes. The staple food here is rice, noodles, and potatoes with less oil and spices.

Famous foods of Darjeeling are Momos, Thukpa, Alu Dum, Nepali Thali, Naga Cuisine, Kakra ko Achar and Kinema and much more. Darjeeling tea is quite popular and it should be enjoyed along with the view.

There is a mix of people living in Darjeeling so their lifestyle is quite unique and yet diverse. There is a great influence of the British colonial era on people here.People of Darjeeling are very friendly and helpful in nature.

Hinduism and Buddhism are followed predominantly here. There are many immigrant groups living in Darjeeling. The rich culture and heritage are celebrated through many local cultural festivals. The main languages spoke here Nepali, Hindi, Bengali, English, and Tibetan.

Things to do in Darjeeling

Riding on the Darjeeling Himalayan Railway Toy Train is quite fascinating and full of fun. The small steam engine along with its mini coaches moving along the narrow tracks is spectacular. It is one of the heritage transports in India and it offers a mesmerizing view of the mountains.

It is the highest national park in West Bengal and it was converted to a National park from a Wildlife Sanctuary in 1992. There are many rare species of animals and orchids found here and also, it offers a scenic view of the Himalayan Peak. It is also known for its trekking trails to Sandakphu and Phalut. Jeep Safari at Singalila National Park is adventurous and offers beautiful views of villages, peaks, and greenery.

Located on the summit of Ghoom, Tiger Hill is famous for its beautiful and splendid morning sunrise from the peaks of Kanchenjunga. The sunrise illuminates the peak of Kanchenjunga and at Tiger Hill, you can soak in the natural beauty of sunrise and great views.

A public park in Darjeeling, called Shrubbery National Park offers breathtaking views of the Kanchenjunga and other peaks of the Eastern Himalayas. There is a statue of Lord Shiva and a musical fountain inside.

Also known as Barbotey Garden, offers beautiful and is a major tourist attraction in Darjeeling. The benches are made up of cutting rocks and it has gorgeous flowers all around.

It is a Tibetan Buddhist monastery, also known as the Yiga Choeling Monastery located at Ghoom and is built at an elevation of 8000 feet. It is famous for its 15 feet high special statues of the Maitreya Buddha. It was established in 1850 by Lama Sherab Gyatso and you can find rare Buddhist manuscripts here.

It is famous for rare species like Red Panda, Siberian Tiger, Tibetan Wolf, Black Bear and Snow Leopard. It is located at an elevation of 2133.5 m and conserves endangered species. It attracts a lot of visitors every year and offers a scenic view from the top.

Located in the center of the Batasia Loop Garden, the Darjeeling War Memorial was built to honor the Gorkha soldiers of Darjeeling who lost their lives in various operations and wars after India’s independence.

It is one of the best mountaineering institutes in the world, established in 1954. It attracts people interested in pursuing the sport of mountaineering from all over the world. The institute offers a beautiful view of Mountain Kanchenjunga and scenic environment that attract a lot of tourists.

It is a self-help centre, which is the residence of many Tibetan refugees and was established in 1959. You will get to see the lives of these refugees working as craftsmen. It has helped the underprivileged Tibetan community in many ways.

Darjeeling is a tea-growing estate and there are many tea gardens operational in Darjeeling. Some of the famous tea estates are Ambootia Tea Garden, Arya Tea Estate, Balasum Tea Estate and many more. You will get to see the cultivation of Black, Green Tea, White Tea and Oolong Tea.

This Japanese Temple is built in traditional Japanese style and is also known as Nipponzan Myohoji Buddhist Temple. There is a Peace Pagoda close to the temple, that has four avatars of Lord Buddha. The Peace Pagoda was built by Nichidatsu Fuji and it is the tallest standing structure in Darjeeling. 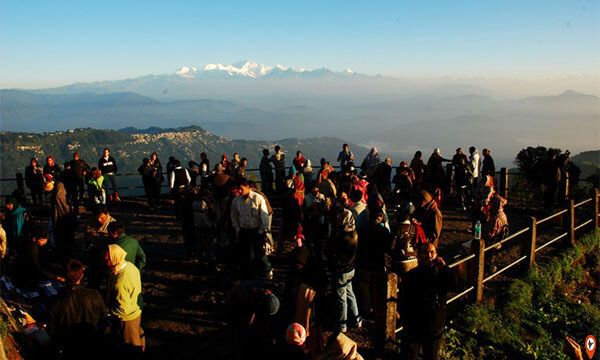 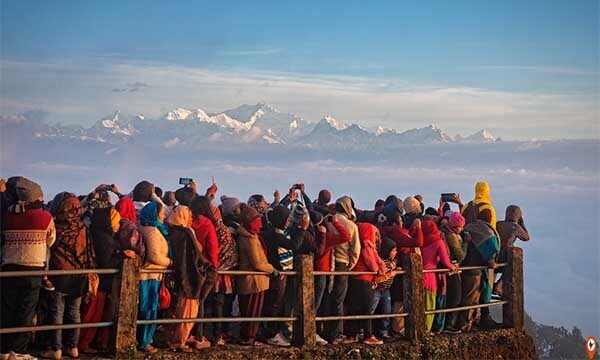