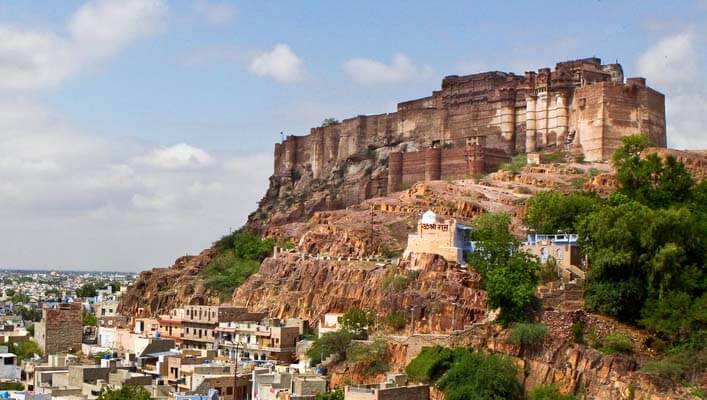 Mehrangarh Fort means ‘Fort of the Sun’ rising perpendicular at a height of 410 feet above the surrounding plains built by the fifteenth Rathore ruler Rao Jodha in the year 1459.

Mehrangarh Fort is remarked as one of the largest forts in India, spreading over the area of around 500 yards and which preserves the invaluable history of India and the royal life of the Rathores of Rajasthan.

The lofty and thick walls, magnificent elevated gates, splendid palaces, and the incredible artistic and carving work on the walls of the Mehrangarh Fort shows the living proof of the drudgery and expertise of the Jodhpuri sculptures and architectures.

front view of the Mehrangarh Fort

Rao Jodha the fifteenth ruler of the Rathore kingdom founded the Jodhpur which was previously known as Marwar. But, after the one year of his coronation, he found that the thousand years bygone Mandore Fort was no longer acknowledged as secure shelter.

So, he decided to establish the capital to some other safe and secure location in Jodhpur, which he found on the hill called Bhaurcheeria means the mountain of birds situated around 9 Km to the south location of Mandore.

According to the legends, the story of curse begins from here, when Rao Jodha ordered his men to clear the hill which was occupied by a holy man named Cheeria Nathji who took care of the birds, fed them, and spoke to them. Being evicted from the hill, the furious Cheeria Nathji cursed Rao Jodha “May your kingdom suffer from recurrent drought”.

After that, apologetic Rao Jodha went to the Baba to request him for forgiveness and for abolishing the effect of the curse. The Baba said it could not be taken back, but its effect could be reversed if someone self-sacrifices his life by being buried alive on the hill.

The king came back gloomy as he thinks that nobody would come to self-sacrifice his life. But, Rajaram Meghwal proved him wrong, he presented himself in front of the king and in return King was promised him that his family would be looked after by the Rathores.

On an auspicious day, Meghwal was buried alive and the king laid the foundation stone of Mehrangarh Fort in 1459 by the hands of Shri Karni Mata, a female Hindu warrior sage. To this day the scion of Raja Ram Meghwal still lives in Ram Bagh, a property which was bequeathed by Rao Jodha.

Mehrangarh Fort houses the Meghwal’s memorial where he was buried alive and also the temple devoted to the Cheeria Nathji. Even today the area is afflicted by drought in every 3 to 4 years.

According to the legends, the fort of Bikaner and Jodhpur remain in the hands of the Rathores, as both had their foundation stone laid by Shri Karni Mata.

So, after facing so many obstacles Rao Jodha was able to build this magnificent Mehrangarh Fort which has now become the most attractive tourist destination in Rajasthan. 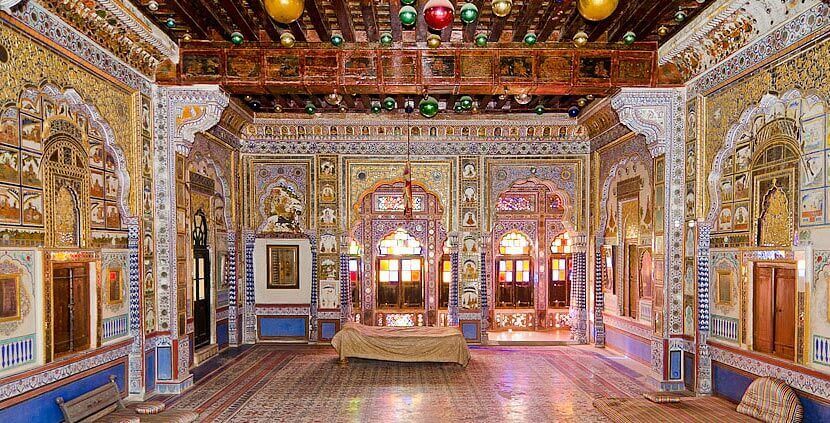 Mehrangarh Fort and all its palaces were completed, their construction over a period of around 500 years, that’s why the architecture style of the fort and palaces varied from one place to another.

This immensely spreads structure of the fort is situated at a height of 410 feet from the plane on a hillock, surrounded by the lofty walls, which are around 36 meters high and 21 meters wide.

Mehrangarh Fort has seven gates to enter into the fort, some popular ones are:

which was built by Maharaja Man Singh in the year 1806 to celebrate his triumph in a war with Bikaner and Jaipur. You can still spot some craters of cannon balls during the battle near its walls.

was built in the year 1707 by Maharaja Ajit Singh to celebrate the triumph over the Mughals. This gate was defended with numerous spikes which are very robust and hard to beat by enemies.

This was constructed in the year 1549 during the ruling session of Maharaja Maldeo.

Both these gates are small as compared to others and house several Guard rooms.

Also known as Lakhan Pol was built in the 19th century, the walls around this gate still possesses the marks of massive mortar balls in it.

is the sixth gate studded with sharper iron spikes? The left side of the gate, you find the ‘Sati marks’ the palm impressions of the royal widowed women who sacrificed their lives on the funeral pyres of their husbands and the most shocking and dreadful is that they would not scream or cry when they burned alive.

The last immolation was held in 1843 by the queens of  Maharaja Man Singh.

This is the last gate comes after entering through the Loha Pol. Then, we come across the Shangar Chowk (Coronation Courtyard) where the kings of Jodhpur were crowned on a throne made up of marble.

It was built by Raja Sur Singh, the palace was used by the king to sit on his royal throne and discuss the issues with his ministers. This is remarked as the largest period room of the Mehrangarh Fort. Palace also has five hidden balconies built for kings, five queens to listen to the court proceedings.

This palace was built by Maharaja Abhaya Singh, the gold which was used in the construction of the palace was coming from Ahmedabad, Gujarat. The palace was used as a private chamber of pleasure by kings like Girls are dancing here for the pleasure of the king.

Shows the magnificent mirror work done by the skilled artists of that era.

This chamber belongs to Maharaja Takhat Singh’s spruced up with alluring paintings, pictures from the Krishna Leela, and stunning woodwork on the ceiling.

Constructed for the royal ladies to hear the court proceedings from here. This palace treasure a well-heeled collection of gilt mirrors, royal cradles, mesmerizing figures of fairies, birds, and elephants.

Mehrangarh Fort Gallery is one of the major attractions of the fort preserves Elephant’s howdahs a kind of two compartment seat made up of silver or gold fixed on an elephant’s back, big compartment used by the kings to sit and the smaller one for the attendant, Palanquins were used to carry the royal queens and princess from one place to another, Armory.

It has the vast collection of swords, guns, and much more, Paintings, the Turban Gallery displays the various types of turbans once prevalent in Rajasthan, and the Folk Musical Instruments gallery showcases various musical instruments.

Things to do in Mehrangarh Fort

The fee to Chokelao Garden: